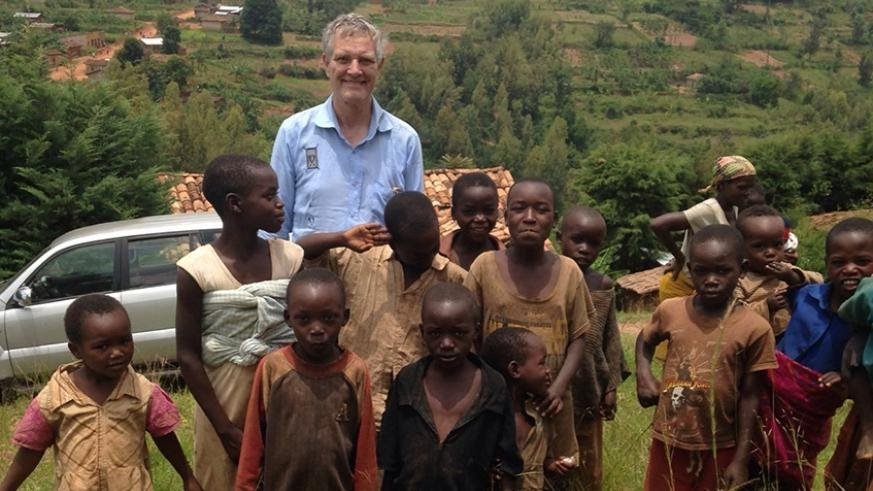 The occurrence of poor health among vulnerable expectant mothers and infants prompted Luk J. CANNOODT, a retired health policy analyst and educationist, to set up an initiative that would push for revival in maternal and child health.

Together with his wife Claudine MUKESHIMANA, they started a project IMPORE (Improving Maternal and Paediatric Outcome: the Rwandan Experience), focusing on the most vulnerable children in Southern Rwanda.

They wanted to help deal with some of the challenges that are faced by vulnerable communities, especially mothers and their infants, such as malnutrition.

His initiative came shortly after arriving in Rwanda in 2005, where he observed how these children were at risk of dying prematurely or become chronically malnourished and also, have difficulties learning at school.

Before he came to Rwanda, Cannoodt, a Rwandan-Belgian national, worked in Geneva for the World Health Organization. Back in Belgium, he was teaching Health Policy and Health Economics at the Catholic University of Leuven and the University of Ghent and was a health policy analyst, advising several ministers of health, especially on the organisation and financing of mother and child care in Belgian hospitals.

He chose to share his expertise when he came to Rwanda and worked as the Dean of the Faculty of Public Health and Human Nutrition at the Catholic University of Rwanda at Save (CUR).

Cannoodt says when he started this project, he wanted to better integrate national and local policies in line with maternal health.

A shelter for babies

In 2014 he established a temporary shelter—Chez Marraine—for babies in Taba (Huye District), and for the last six years, it has been a home for infants who had no mother to take care of them; those who were either abandoned or had lost their mothers. Most of them though have now been integrated in families.

In 2019, Cannoodt says they started allowing mothers with low birth weight babies who have a high risk of dying to stay for some time at the shelter.

“The same year, we also started to organise day-care for infants of poor, single teenage mothers. For these mothers, we pay tuition fees so that they can get a sewing degree. Last year, we constructed a sewing workshop at Chez Marraine so that those teenage mothers can further practice, under supervision of an experienced dressmaker, what they were taught during the vocational training,” he says.

His attention to low birth weight babies came as a result of him identifying that a big percentage of these babies died within two years after they were discharged from hospitals.

“Since the beginning of 2019, we are also closely following the LBW babies that are discharged from the neonatal department of Kabutare District Hospital. Research from our NGO concluded that 20% of LBW babies died within two years after they already left the hospital to go home. Since the start of the project, this percentage dropped to less than 2%.”

With the support of some sector authorities and health sector staff, Cannoodt provides land to these associations, seeds and fertiliser so that they can grow vegetables, sell part of the harvest, distribute another part to the members (of their household) and keep some of the harvest as seeds for a following rainy season.

“This project (financed by the Province Vlaams-Brabant in Belgium) is also very successful. Within a year, most of the members of such associations no longer have malnourished children.”

Another group of vulnerable children are poor pupils with learning difficulties. Cannoodt believes if they cannot follow in the first years of school, they may never catch up with their classmates and finally drop out of school prematurely.

For this project, he works together with the leadership and teachers of Cyendajuru Primary School and two Belgian not-for-profit organisations (UMWANA and KIMIAF).

In January this year, he is planning to start new projects in collaboration with Root Foundation and the Centre for Global Sports Africa (both based in Kigali).

The health specialist reveals that his main objective is to improve life expectancy and quality of life of some of the most vulnerable children in the District of Huye.